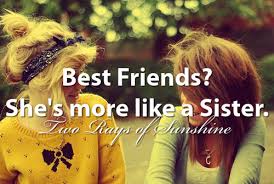 I wrote yesterday about my best friend. Today is her actual birthday. I decided I had more to say just to her. I can’t say them in person now, but I can share them here.

Happy Birthday, Mary Alice Lunsford Click. I didn’t get to say goodbye to you.

I found out weeks ago that you truly were ok that June. You went Home on June 20, 2013. I think I already knew, but the reality came crashing in then. I am still at peace, but the sadness rose because I never got to say goodbye.

We met when I was 23, you were that co-worker that everyone liked. As a teacher, you were the most popular teacher. It wasn’t because you were weak or too easy, but because you were good. You almost never had any discipline problems in your classroom despite the type of school where we taught. You taught well and made learning fun. I learned a lot from you as I entered the classroom for the first time.

It took a few months, but a friendship developed. I remember when your mother died. I went to the funeral home to let you know that I cared. You seemed so lost, but you managed a smile. Time went on, and we became inseparable. Neither of us noticed it until some of our other co-workers and friends started calling us the “twins”. We laughed because we argued sometimes as much as we joked. You loved to tell me how to dress and put on my makeup because I never got it right. I would get annoyed at first, but you kept on. You were always giving me advice. We could talk for hours about nothing, but it could seem like profound lessons would always be found in our talks. It really did seem like you became the big sister I probably needed. You made me laugh, encouraged me when I was unsure, and gave me a good swift kick when I needed it.

I remember your wedding and how you loved magnolia blossoms. I remember the day you bought your house and how you loved to decorate the yard and inside in country sweetness and for every holiday. I remember all the friends we met at the yard sales we had twice a year and how many looked specifically to come to get your clothes. You sure liked to buy clothes. You had so many that a few times you had some in the yard sales with the tags still on. You loved helping those women pick out just the right outfit for them. We all got laughs as you would make sure their men let them take home as many as the women wanted. That was definitely your element.

Two moments, though, rise to the top as being the greatest gifts you ever could have given me. One was when you told everyone I was your sister because you wanted me to stay with you in ICU, and you felt safe enough to tell me you were afraid. Holding your hand, so you could sleep was my pleasure. The other moment was when you called to tell me that you had accepted Christ as your Savior. I had quietly prayed for that for several years after we met. I never judged you because I had been lost and searching as you had been until I let Jesus change me, too. I knew what you needed most, but I knew preaching to you, especially from me, wouldn’t help. I just decided to be your friend as best I could and pray that God would show you the way. He did, but when you thanked me for being the example that showed you God’s light and made you want  what I had, my heart burst. I said, “I always wanted to tell you straight out, but I wasn’t sure how.” You told me, “No, you did it the right way. I would never have listened to you, my kid sister. Your actions led me to search for the right person to ask what it was you had.” As time and disease took its toll, I was more and more thankful that I knew we would be friends forever, and I would never really lose you.

That assurance of knowing you are in Heaven now is why this isn’t really goodbye, Mary Alice. I wish I had been there physically when you left this plane, but I do think I was there spiritually in the way we always seemed to know when we needed each other. I hope you felt my prayers. Now, I honor you friendship, and tell you thank you for being just what I needed all those years. You truly were my best friend and my sister. Happy Birthday. I will see you again, and we will sit together as always. I might even let you fuss at me and tell me the way I should have done things. I love you, Girlfriend!

There are many friendships that fade away over time and space. There is nothing wrong with that. Life is a book with many chapters. As life goes on, so do the characters in our story. If we are blessed, we might have that one friendship that lasts throughout the story even when time and space separate your moments together along the way. I was blessed with such a friendship.

We saw each othe r daily for over ten years as we worked together. A change of job did little to limit us as we talked each day and often saw each other on weekends and always had our bi-annual yard sales to make sure we had plenty of time to keep up with each other. As my friend developed worsening diabetes, she lost her eyesight and then her kidney function and was on routine dialysis for year after year as she waited for a kidney transplant that never came. We saw each other less, but we still kept in contact. Once, she was hospitalized and death seem near as she had an infection in her foot that resulted in a few amputation surgeries. In ICU, only family members were allowed, but my friend, knowingI would be coming, lied telling the staff that her sister would be here soon and to make sure I was let in. As I arrived and asked for her by name I was told, “Oh, yes, we have been expecting you.” I stayed with her the whole time until God chose to heal her giving her several more years.

Finally, as my DeafBlindness worsened to the point that we had no means to communicate as she didn’t do computers, and I no longer had technology that would let me use a telephone, our contacts were less and less frequent. She always joked, though, that we had a mental connection to each other as we each instinctively knew when the other needed us. We had made sure when we felt the call to answer it no matter what it took. In the last five years that became almost impossible for me due to my DeafBlindness and the lack of a relay system usable for the DeafBlind. I continued to send messages through hearing-sighted people, but I don’t know how many of those she ever got. I prayed for her almost everyday.

The last time I got that feeling that she needed me and felt that intense need to pray was in March of 2013. I tried sending messages by asking friends to call her number. They left messages. We didn’t hear back. Finally, in June between my wedding anniversary and my birthday which is the 22nd and 26th respectively, I felt a peace every time I thought of her. I figured all was well in one way or another. I seldom mentioned her to my husband anymore. I just felt she was alright. The friends I asked to call left messages, but I heard nothing about my friend again.

On Valentine’s Day 2016, I finally felt able to try again to get the answer that I think I already knew. My husband checked and found her obituary on the internet. She died on June 20, 2013. You read that right. She died almost three years ago. She died when I finally felt at peace and didn’t think I needed to reach out anymore. I guess we did have a mental connection.

I write this now as her birthday approaches. It was that day, April 15th, of every year that I always made a point of trying to call her no matter what. The last year or two she was alive I wasn’t able to, but I didn’t forget. There just wasn’t anyone available to make a call for me.

So, I find again that I must grieve differently in the Dark Silence. We can  miss both in times of life and in times of death. In bringing us access to the world, some things have improved, but I dare say there is still much for which to fight. Everyone deserves a friend like I had, and a way to always stay in contact and share.

Happy Birthday, Mary Alice Lunsford Click, my best friend, my “sister”. I miss you, but I will see you again someday for I know you are Home safely.